UPDATE: Please read our updated post on the final release of Lucid Lynx!

Just last week, I was complaining about Ubuntu's lack of built-in support for iPhones and newer iPods. Personally, I think this functionality is important if Ubuntu wants to grow in the consumer market. With the release of Lucid Alpha 3, I saw a couple of reports saying that iPhone and iPod Touch support was included out of the box. So, I plugged in my iPod Touch and was amazed to see it not only show up on my desktop, but also working inside Rhythmbox! 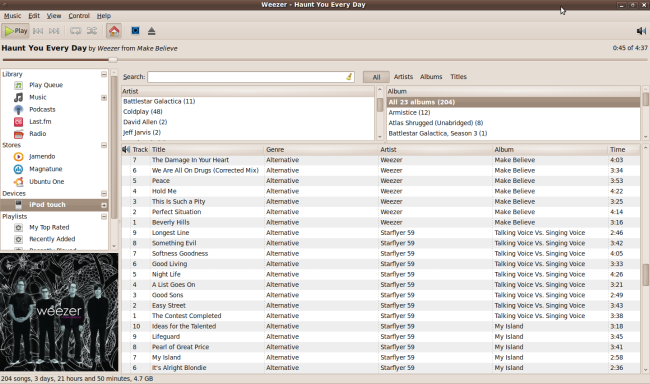 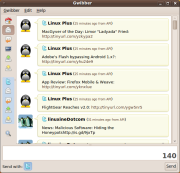 Ubuntu 10.04 brings social networking to the default desktop with Gwibber and the new MeMenu. This is part of Canonical's "Social By Default" initiative for Lucid. Gwibber allows you to connect to multiple social networking sites and interact with them in a unified window within Ubuntu. Gwibber currently supports Twitter, Facebook, Flickr, Digg, Status.net, Identi.ca, Qaiku, and FriendFeed. The MeMenu takes things even further, giving you an overview of all your social networks and chat accounts, even allowing you to set your status and post to your social networks right from the top panel.

There is still quite a bit of work to do on the MeMenu if it’s going to meet the blueprints that have been made for it, but it’s coming along nicely. Gwibber also seems to be quite buggy, but a quick look at Launchpad shows that the developers are busy fixing bugs and adding features. When 10.04 final hits the net in April, I think the “Social By Default” initiative will prove to be a huge success.

It's only been two weeks since Facebook announced support for the XMPP/Jabber protocol, and Facebook chat support is already supported in Lucid Alpha 3. Empathy now includes Facebook chat along with the multitude of other chat protocols that it supports. With support for Facebook chat in Empathy and Facebook updates in Gwibber, you can now keep in touch with your Facebook contacts without ever visiting the site.

One thing that has really bugged me about the last two releases of Ubuntu is Pulse Audio. Ever since Ubuntu switched to Pulse Audio, I've had nothing but trouble with sound. Things seem a bit better in 9.10, but to get good control over sound you have to install the Pulse Audio Volume Control. Lucid Alpha 3 includes a new sound preference panel that's available by default and right from the sound widget in the top panel. 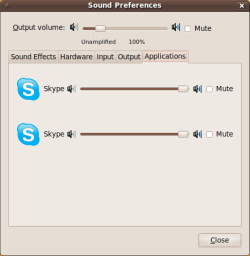 This sound preferences panel is a unified place for controlling everything sound related in Ubuntu. You can set your sound theme, configure your sound hardware, choose and configure input and output devices, and also see and control how individual programs are interacting with your sound devices. This is especially useful for configuring applications like Skype.

Ubuntu 10.04 is shaping up to be a fine release. Alpha 3 is pretty stable and brings some great new features with it. There are still more features to come, such as the Ubuntu One Music Store and possibly a new theme. I look forward to tracking Lucid's progress and installing it on all of my workstations when it is released in April.

Have you tried Ubuntu Lucid Lynx yet? What are your favorite new features? Leave your comments below!