What Is the Best Tablet for a Linux User? 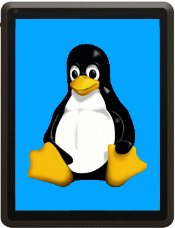 As an Ubuntu Linux user and someone who has aversion to vendor lock-in, I’ve been holding out on getting a tablet computer, waiting for something better and more Linux friendly to come out. With some of the improvements in the new Android tablets, I think I’d finally like to get a tablet. However, doing some tablet comparison, I don’t know which tablet I should get. Of course, my ideal tablet would be something that comes with a fully open Linux OS or even with Ubuntu for Android, but it looks like such a tablet won’t appear on the market for quite a while.

So my question is, which currently available tablet makes the best companion to Linux desktops and notebooks. I would prefer to not rely completely on cloud services from Apple or Google for synchronization with my desktop, but I’m not sure what other options are out there. Is it possible to use something like ownCloud with an Android tablet?

What are your experiences with using a tablet along with your Linux desktop? For example, can you use an iPad along with Ubuntu or synchronization impossible without iTunes? What about the Android tablets, do they work well with Linux? I’m interested in the experiences of other Linux users with their tablets. Please share your experiences and advice in the comments below.