Confessions of an Ubuntu Fanboy

Hi, my name is Jim and I’m a recovering Ubuntu fanboy.

The Urban Dictionary defines a fanboy as “a person who is completely loyal to a game or company regardless of if they suck or not.” In the past, I’ve been exactly that, and I think that a lot of other people in the Ubuntu community have been too. We’ve been loyal fans of Ubuntu, telling all our friends, blogging the praises of Ubuntu and Open Source Software, being quick to point out the faults of the evil Microsoft, and all this time overlooking whenever there’s a problem with our favorite operating system.

Let me be clear, I’m still a huge fan of Ubuntu. I still think Linux is the best operating system on the market today, and that Ubuntu is a great choice for most people’s desktop computers. What I’m saying today is that I no longer want to be a fanboy!

Below are some of the things I’ve said in the past, things that we’ve all said, things that Canonical sometimes says - things that are not completely true.

Ubuntu is easy to learn

In the past, I've been guilty of installing Ubuntu on a new computer and leaving the poor user with words like "don't worry, Ubuntu is easy to learn, it's really not that different from Windows." While this is true for geeks and people who love experimenting with computers, I've learned that it's simply not true for most users. Computers are difficult!

But it’s true, right? Yes, Ubuntu is easy to learn. In many ways, it’s easier than Windows. The Linux community and the Ubuntu team have made amazing progress in the past few years and I can honestly say that Ubuntu is now easier to use than Windows or OS X. So what’s the problem?

The real problem is that people are accustomed to Windows, it’s the only system that most people have ever used, they know nothing else. Very few people have had formal training in computers and just had to figure things out by muddling through. They’ve found ways to do the things they want in Windows (even if those ways make us geeks cringe).

Without some guidance on how to do things in Ubuntu, they soon realize that they’re going to have to muddle through an entirely new system, learning everything from scratch. This can be terrifying.

If we want people to use Ubuntu, we need to help them make the transition. There should be video guides to using Ubuntu right on the default desktop. I know that the Ubuntu team is working on new documentation for version 10.04, but this is not enough - we need to show people the basics right on their screens.

You can get support from the community

New Ubuntu users often ask where they can get support for their new system. They realize that most people around them are not using Ubuntu and wonder who they'll ask for help when things go wrong. One answer I've given in the past is "you can get support from the Ubuntu community." Sure, there are support forums, IRC channels, and you can find the answer to just about anything by googling for "Ubuntu + problem." But is it practical to ask people to search forums, or ask for support in IRC? 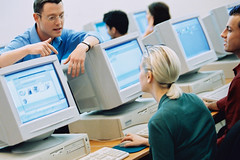 Most of the support forums and tutorials you'll find on google are full of technical details that make no sense to the average computer user. There's talk of terminals, of "sudo", "vim", "nano", "apt-get" and so on. I rarely see instructions for Ubuntu online that don't include using the Terminal.

As Ubuntu fanboys, we need to realize that this stuff is hard for new users, when we’re posting on our blogs or showing our friends how to do something, we need to explain to them the easiest way to do something (preferably without a Terminal) and explain what we’re doing. We should be trying to help new users, not putting them down or getting angry with them in forums. This is a difficult task, but adding new users to the Ubuntu community depends on it.

Ubuntu's website saysthat "OpenOffice.org is compatible with all office applications including Microsoft Office." I've told lots of people the same thing - I've told them that all they need is OpenOffice. After all, why should they pay hundreds of dollars just to write letters in Word?

While OpenOffice is perfectly fine for me, and great for people who just want to write letters and make simple presentations, it is often not a good fit for business professionals who have spent most of their adult lives working inside Microsoft Office. These people have spent their whole professional lives learning Microsoft Office, they understand it and can get their work done quickly. To many, the operating system is just the “thing that helps me get the computer going so that I can open Office.” Putting OpenOffice in front of someone like this can be frightening and frustrating for them.

Then there’s the issue of compatibility. OpenOffice’s compatibility with other office suites is amazing, and things will work most of the time. The problem comes when the new Ubuntu user sends their first document to their boss and it’s an ODF document instead of a Word DOC. The boss doesn’t have OpenOffice, so she calls the person and says she can’t open the file. About 90% of the time, the new user’s confidence in Ubuntu is now lost. They’re now convinced that this new system of theirs is not compatible with the Windows world and it’s already starting to cause them trouble. Soon enough, someone from accounting will send them an Excel spreadsheet with lots of formulas and it won’t open or save right in OpenOffice. The user is now sick of this “Linux thing” and ready to reinstall Windows. As the most important program for most users, if OpenOffice fails, Ubuntu fails.

I have to confess, moving away from iTunes was a problem for me. I started my move away from Windows almost 6 years ago, and because I had so much music in the iTunes DRM format and several iPods, I just couldn't do without iTunes. Media players on Ubuntu have come a long way, and with the upcoming 10.04 release, Ubuntu will even have its own music store. This is great, but it doesn't solve the problem for many people.

Photo by: The Rocketeer

Ubuntu's website advertises that you can just plug in your iPod and use it with Rhythmbox. If you have an older iPod, you might be able to use it with Ubuntu. Unfortunately, for those users of modern iPods, Apple has completely locked them down to iTunes - you simply can't access them in Ubuntu! So what's a person supposed to do, throw away their iPods just so the can use a new operating system that they're not really sure about in the first place? This just isn't going to happen.

If Canonical wants to gain ground on the desktop, they need to put a lot of resources behind making a world-class competitor to iTunes, and it needs to support iPods. Period.

One of the first questions that people ask me when I'm trying to convince them to try Ubuntu is "can it run Adobe?" Usually, they want to run Photoshop or Acrobat. I used to tell them that Ubuntu has "a program that is like Photoshop." Unfortunately, I've never had anyone try GIMP and actually like it or agree with me that it's "like Photoshop." The GIMP is hard for people to use (as is Photoshop) and if you grew up on Photoshop, nothing will easily replace it. Direct replacements for other Adobe products like Acrobat, Dreamweaver and inDesign either don't exist or are not very mature.

Again, what can be done about this? Personally, I’ve stopped telling people to use the GIMP and started telling people who want the Adobe Suite that they can install it right inside Ubuntu with the help of something like Crossover. Why not just use the applications they’re used to, especially if they already have a license?

I really believe that Canonical should partner with a company like CodeWeavers to bring Adobe support directly into Ubuntu. If someone wants to install Adobe CS4, let’s help them. We can be Free Software fanboys and push people away, or we can help them transition to the world of Ubuntu and bring their legacy applications with them. It’s a choice between fanaticism and being practical.

What do you think about these topics? Leave your comments below!