GTD Tools For Your Mac

I’ve recently been getting into David Allen’s book “Getting Things Done” and trying to get a good GTD system set up on my Mac. It doesn’t take much looking around to find a plethora of new GTD apps for Mac OS X. Here’s just a few of the apps that I’ve come across. 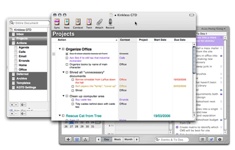 kGTD seems to be the grandfather of Mac GTD apps. kGTD is somewhat difficult to understand and depends on OmniOutliner Pro. It's basically a set of AppleScripts that work to sync your data between OmniOutliner and iCal. Considering its complexity and the $70 price tag on OmniOutliner Pro, I don't recommend kGTD.

Actiontastic is a fairly simple GTD application that's still in beta. It integrates well with OS X, featuring iCal syncing and a Quicksilver plugin. I found Actiontastic a bit too simplistic, but I'm sure more features will be added as it nears version 1.0.

Ghost Action looks remarkably similar to Actiontastic and feature a lot of the same functionality. This is to be expected to some degree because there are only so many ways to implement a GTD system, but I found myself wondering who is copying who. While it does offer iCal syncing, I found Ghost Action far too simplistic for my needs. 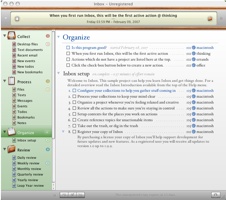 I was really excited about Midnight Inbox when I first saw it. This application is by far the most ambitious of the current Mac GTD crop, but it really fails to deliver. I've tried (really tried) several times to use Midnight Inbox and each time I gave up out of frustration. The application looks beautiful, but the developer needs to focus more time on making the user interface easy to use. Midnight Inbox automatically collects things like incoming Email and lets you associate them with tasks and projects. In theory, this is a great idea, in reality, it just doesn't work very well. This is an application that I'll probably come back to and try again when they release version 2.0.

OmniFocus is a product that's still under development by the guys over at OmniGroup. It's basically the successor to kGTD and has a lot of support and buzz right now in the Mac community. I wish these guys luck and hope that they come out with a great product. 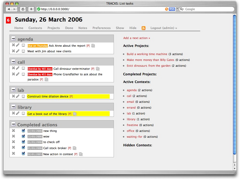 I've finally settled on using the open source Tracks application. Tracks is a Ruby on Rails based application, so if you're not a Rails developer, it's pretty hard to get set up. Future versions of Tracks will most likely have a stand-alone version that will make installation simple. I'm currently running the unstable "work in progress" version of Tracks locally on my Mac. Tracks has a great set of features and integrates well with iCal. I plan to keep using Tracks for now. If you have some Rails experience, I highly recommend Tracks.

Hopefully, over the next year or so, the market for GTD applications will settle down and we’ll all be able to choose from 2 or 3 really solid programs that will help keep us organized and on task.