What's New in Dropbox 1.0 for Ubuntu

The folks over at Dropbox released version 1.0 yesterday. This release has been a long time coming and is a major upgrade for Windows, Mac and Linux. For Ubuntu users, the biggest changes include the introduction of selective sync, Indicator Applet support, and a much more efficient client-side engine. 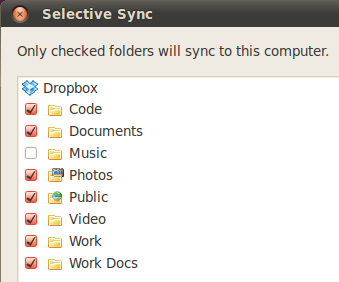 Dropbox 1.0 uses Ubuntu’s new Applet Indicator instead of a traditional system tray icon. While not a huge change, this keeps Dropbox in harmony with the standard application indicators. They also added some new features in the indicator menu such as “Recently Changed Files” and the ability to quickly pause syncing.

It appears that Dropbox is not pushing out an automatic upgrade to 1.0 right away.
In the meantime, you can force Dropbox to upgrade itself by following these steps.

If you’ve never used Dropbox before, now is a great time to try it out. Just head over to Dropbox.com to get started. Click the big download button on the front page and choose either the 32-bit or 64-bit download for Ubuntu. This package installs Dropbox support in Nautilus and will prompt you to restart Nautilus and start Dropbox. You will then be prompted to download the proprietary Dropbox engine. Once all of Dropbox has been downloaded, a setup wizard will walk you through the rest of the process.

Some Ubuntu purists prefer to have all their applet icons match the default monochrome icons. Thanks to enthusiastic artists around the web there are several sets of monochrome dropbox icons that you can use to get keep your icons all looking the same. Personally, I like the icon set that Charles A. provides in the Dropbox forum. You can download his icons here and extract the appropriate set (based on the theme you use) in the .icons directory in your home directory. For example, I saved them in ~/.icons/ubuntu-mono-dark/status/22. Now restart Dropbox and you should have some nice monochrome icons instead of the default Dropbox blue icons.

Update: For even better looking monochrome Dropbox icons, install the deb package found here (thanks to dakira for the tip).

What do you think about this latest release of Dropbox? Does it meet your expectations and requirements for cloud storage or do you find a better online storage solution to be better for you needs? Discuss in the comments below!